Christmas Around the World — Russia 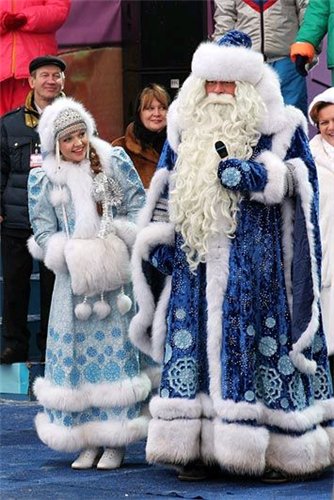 Christmas customs enjoyed in Russia have evolved in three phases. These phases are Russia before Communism, Communist Russia, and Russia after the fall of Communism.

Old Russia Christmas was a religious time before the Communists took over Russia. The Russian Orthodox Church held services every day during the twelve days of Christmas. Nearly everyone in the town and surrounding countryside attended the local church making the services standing room only.

Many people followed a form of Advent. For thirty-nine days before Christmas they would abstain from eating certain foods like meat. No food was eaten on Christmas Eve until the first star was seen in the sky. Many a Christmas Eve found the children of the house peering out the window watching for that first star so the Christmas Eve feast could begin.

The Christmas Eve feast comprised of a twelve-course meal. Fish was a staple of the meal instead of meat which they still abstained from eating. The soup course most likely was borscht, a soup made with cabbage, onions, potatoes, beets, and carrots. Two other popular dishes were kutyala, a rich, sweet porridge made of wheat berries, poppy seeds, and honey, and kissel, a mousse-like berry dessert.

Meat could be eaten on Christmas day. Duck, ham, goose, pig, and other roast meats were the centerpiece of the Christmas dinner. Other dishes included borscht, jellied sturgeon, blini (light buckwheat pancakes rolled with caviar and served with sour cream), pelmeni (mini-dumplings filled with beef and pork), and piroshke (savory, filled pastries).

Christmas trees were popular in the 1800s. They were procured three days before Christmas and decorated with apples, tangerines, dolls made of dried fruit and candy, walnuts wrapped in gold foil, wooden ornaments, paper lanterns, and topped by a shining star.

Instead of Santa Claus, Grandfather Frost delivered toys door-to-door. He did not go down chimneys. He wore a red coat trimmed with white fur and had a long, snow-white, bushy beard. Some children opened the gifts they received from Grandfather Frost on Christmas Eve; others waited until Christmas morning.

During the Christmas season the Russian people enjoyed a practice called mumming. People wandered the night streets dressed as beggars or animals visiting houses and entertaining the householders with their frolics.

They also enjoyed singing Christmas carols known as kolyadki. Kolyadki were originally folk songs for the new year but as time went on included Nativity and other Christmas themes. Carol singers often carried bags in which the visited household would place cookies and sweets which assured the household good fortune in the coming year.

Many Christmas traditions were transferred to New Year's, and Grandfather Frost arrived on New Year's Day. Christmas trees were banned by the Communists; but because the people wanted to keep the tradition, Joseph Stalin, in 1935, lifted the ban calling them New Year's trees.

Many people put up their New Year's trees on December 31 and left them up until January 13, Old New Year's Eve). The trees were decorated with toys, little dolls, colored lights, garlands, and topped with the red star of the Soviets instead of the star of the Magi.

Grandfather Frost was also joined by Snegurochka, the Snow Maiden. The Snow Maiden also dressed in a blue robe or coat and knee-high boots. They would be seen together in parades and many New Year's events.

In spite of the many food shortages suffered by Communist Russia the New Year's Eve feast was usually a large meal. Caviar, smoked fish, and roast meats may have appeared on the table along with fresh fruit and vegetables. A round bread made from wheat or rye flour called karavay or a raised coffeecake called baba (when rum was added to the coffeecake it was called rom-baba) often appeared as well. Cookies were also a staple favorite.

Post-Communist Russia In 1991 with the arrival of Glasnost and Perestroika the Russian people were once again free to celebrate Christmas. Russian Christians were once again able to worship without fear of persecution or death.

The big celebration still occurs on New Year’s Day with extravagant fireworks and organized games. Grandfather Frost still delivers gifts on New Year’s Eve and is still accompanied by the Snow Maiden. The big feast still includes such foods as borscht, blini, sturgeon, halibut, or herring, fresh fruits and vegetables (when available), bread, and sweets such as baba or kissel.

Without the fear of persecution many Russians are returning to church especially at Christmas and Easter. Christmas services in Russian Orthodox Churches are well-known for their sacred music, and many who cannot make it to the services are able to watch them on Russian television.

Today's Russian Christmas customs are still being developed. Some are trying to bring back some of the old customs while others are creating new traditions.