Christmas Around the World — Brazil 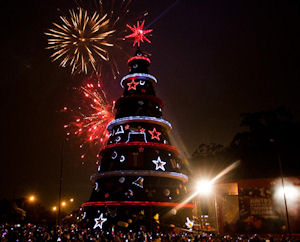 Those who would love to spend Christmas on Christmas Island might enjoy spending Christmas in Brazil. Temperatures range from 70 degrees Fahrenheit to 100 degrees Fahrenheit. A Brazilian Christmas, a blend of Portuguese, African, and Indian customs, is a holy time of remembering the birth of Christ celebrated with close friends and family.

Decorations, especially lots of white lights, start appearing on city streets and in office buildings in early December. Shops and malls set up window displays. Some are simple; others are as elaborate as any department store window seen in the big cities of the United States and Europe. Displays may include the holy family, the three wise men, or Santa Claus with his elves and reindeer. In the more elaborate windows the figures are animated.

Papai Noel: Although pictured as doing so Santa Claus, or Papai Noel as Brazilians know him, does not travel by sleigh and reindeer. Instead he travels by helicopter. In early December thousands of children fill Maracana Stadium in Rio de Janeiro waiting for the arrival of Papai Noel. The helicopter lands; Papai Noel steps out, and the children flood the field. He greets the children shaking their hands and giving them small toys, such as balloons, water pistols, whistles, and more, as gifts. After the gift-giving Papai Noel steps to a microphone on stage and leads everyone in a sing-a-long. Local singers and musicians accompany the throng as they sing Christmas carols and other popular songs.

While Rio de Janeiro holds the largest celebration of his arrival Papai Noel arrives by helicopter in other large cities of Brazil also.

Throughout the Christmas season Papai Noel may be seen at schools and in the shops and malls greeting children.

Children in Brazil do not hang stockings for Papai Noel to fill on Christmas Eve. Instead, in northern Brazil, children put their shoes by the tree, by their bed, or near a window to be filled with all sorts of small toys and goodies by Papai Noel when he arrives later that night after the children are asleep.

Papai Noel personally visits the children in the southern regions of Brazil earlier in the evening on Christmas Eve. He takes time to talk to each child before giving presents to the child. Often Papai Noel is a relative, a friend of the family, or a co-worker.

Presepios: With the vast majority of Brazilians being a religious people it is not surprising that every church and nearly every home puts up a presepio or nativity scene.

Many churches display life-sized versions of the presepio including life-sized animals. Among those animals is sure to appear a rooster to remind parishioners of the Missa do Galo (Mass of the Rooster). Some church presepios are so elaborate that non-church-goers go to church to see them.

Home presepios may be set up in early December; others are not set up until Christmas Eve day. Some are small fitting on a coffee table; others fill a whole room. Some are simple; others are abundant. Whether large or small, many include pieces that have been handed down for generations.

Presepios are given a place of honor in the home, and each family gives their presepio their own personal touch.

Most home presepios include the Mary, Joseph, Jesus, the three magi, angels, a star, cows, chickens, sheep, and a rooster. One of the peculiarities of these home presepios is the figures may not be the same scale. It is not uncommon for Jesus to be larger than some of the other figures. Another peculiarity comes in the personal touches. One may see Brazilian animals, Brazilian fruits, airplanes, trains, and other "impossible" figures included in family presepios.

Brazilian people love using bright, colorful metallic ornaments on their Christmas trees. They also decorate with handmade ornaments and bright red poinsettias. Because they never see snow for Christmas they simulate snow on their trees by placing puffs of white cotton on the branches. Angels are the tree-topper of choice, and real candles provide the lights on the tree.

Christmas cards: Usually people try to send their Christmas cards so the recipients get them before Christmas; but in Brazil, people think nothing of sending their cards after Christmas. Many cards arrive at their destinations between December 25 and January 6.

Gift giving: Brazilians are a very generous people. Many of them participate in organization-sponsored fundraisers, bingo games, and raffles to make sure the poor and underprivileged have food and gifts for Christmas.

For themselves gifts tend to not be extravagant. Due to the high cost of living gifts take the form of shoes and clothing and books. Gifts for more well-to-do families may include electric trains, dolls, games, and other technological gadgets. Unlike many places across the world, Brazilian people rarely wait until the last minute to shop for Christmas gifts.

Many people participate in Amigo Secreto, or Secret Friend, gift exchanges. Groups of friends, co-workers, schoolchildren, or family members draw names. Each person will then purchase a gift for their amigo secreto. Many times the gifts tend to be gag gifts that do not fit the recipient's personality or physical traits, like cigars for a non-smoker or extra long pants for a short person. Sometimes there are two rounds of Amigo Secreto gifts. The first round is the gag gift; the second is a more appropriate gift.

Some families who open their gifts on Christmas day hide the children's gifts outdoors for them to find. This is similar to Easter egg hunts held in the United States and other countries around the world.

Christmas Eve: When Christmas Eve day dawns there is much to do. Last minutes house cleaning is a must to make the house look its best. If they have not been done already the presepio must be set up and the Christmas tree decorated. Most importantly the Christmas feast must be prepared.

Turkey is the traditional Christmas dish, but some may serve dried cod and/or a small pork roast with the turkey. The cod is diced and mixed with mashed potatoes, onions, sweet peppers, tomatoes, and olives and then deep-fried.

Brazilian fruits like pineapples, bananas, and grapes adorn the table along with nuts of all kinds and banana pudding. For dessert people enjoy Christmas cookies, honey cookies, mousse, ice cream, and rabanada. Rabanada is a favorite dessert made by dipping stale bread in a mixture of milk and beaten eggs. The bread is then deep-fried until golden brown and sprinkled with cinnamon and sugar.

Many families also enhance their eating delight buy treating themselves to a cesta de Natal or Christmas basket. These baskets range from simple and inexpensive to elaborate and costly. Made of wood and straw and wrapped in colorful cellophane the cesta de Natal may be filled with fine wine, champagne, whiskey, chocolates, nuts, sweets, dried fruit, and canned goods.

As the day progresses the Christmas tree, after it is decorated, is revealed to the children. Then the family gathers around the tree to sing Christmas carols.

Some families serve their Christmas feast before going to midnight mass. Others, who plan to stay up most if not all night wait until after mass to eat their meal.

At midnight many fill the churches for the Missa do Galo (Mass of the Rooster). The rooster is celebrated as the one who first announced the birth of the Christ child.

Christmas day: In those houses where Papai Noel did not make a personal visit, the children awaken to search for the gifts left overnight. Those families who did not attend the Missa do Galo may attend an early morning Christmas service instead. After the service the family gathers to open their gifts. Weather permitting gifts may be opened outdoors with the children hunting for their gifts for added family pleasure.

The rest of the day is spent with extended family. They play games, sing and dance, go to the beach, and have elaborate barbecues.

Folia de Reis (Festival of Kings): Many cities, towns, and villages across Brazil celebrate the three wise men and the city's, town's, or village's patron saint during the Folia de Reis which lasts from December 24 to January 6, Three King's Day. Groups of people known as Reisados parade through the streets playing a wide variety of musical instruments. Some of the marchers dress up as clowns or other figures.

Reveillon (New Year's Eve): Whereas Christmas is a family celebration Reveillon, or New Year's Eve, is celebrated with family, friends, acquaintances, and strangers. The old year is sent out and the new year is welcomed with much partying, formal balls, dinner parties, and get-togethers. Much singing, dancing, and merrymaking occurs during Reveillon.

When midnight arrives church bells ring, car horns and sirens blast, and fireworks, Roman candles, and flares are lit making a cacophony of noise. Many people head for the beaches to watch spectacular fireworks shows.