Christmas Around the World — France 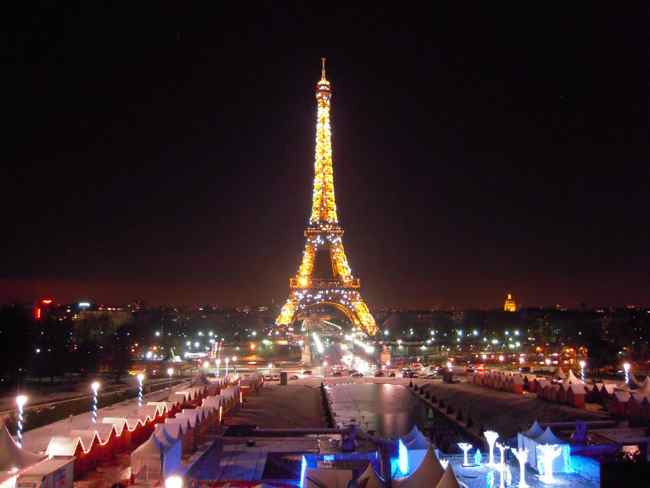 The first recorded observance of Christmas occurred in 496 B.C. when, on Christmas day, St. Remi, Bishop of Reims, baptized Clovis, king of the Franks, and three thousand of his men into Christianity. Clovis followed this baptism with a large Christmas party for his people.

Houses are given a thorough cleaning. Floors are swept. Furniture is dusted and waxed. The silver is polished to a bright sheen, and the finest china is brought out to grace the Christmas board. After that the house is filled with the glorious sounds and aromas of Christmas cooking and baking.

In nearly every house a manger scene is lovingly brought out of storage and given a place of prominence in the living room. The manger scene first appeared in Avignon between 1316 and 1334 B.C. but did not become popular until the 16th century. Legend says that ancestors of St. Francis of Assisi brought the tradition with them to France. Many families have figures that have been handed down from generation to generation and may be a hundred years old or more. These scenes may be simple scenes with just the holy family, shepherds, wise men, and a few animals; or they may be very elaborate forming a complete village with many figures called santons, little saints, representing Bible characters and villagers seen in everyday life, such as a mayor, priest, policeman, butcher, and baker. Many families purchase new santons to add to their nativity scene every year at a local store or outdoor Christmas market. Even children get involved gathering moss, stones, and twigs to be included in the scenery.

Churches throughout France are also decorated with lights, Christmas greenery, and a nativity scene. This nativity scene may be life-sized with real animals and people portraying the Bible characters.

The Christmas tree is not as popular in France as it is in other parts of the world. The first Christmas tree appeared in the Alsace-Lorraine region of France, near Germany, in the early 1600's and was decorated with artificial colored roses, apples, sugar candy, and other colorful items. Families travel to outdoor flower markets a few days before Christmas to obtain a Christmas tree as well as mistletoe, branches of fir and holly, and other fresh and dried flowers for their Christmas decorating. The tree is then decorated with candles, tinsel, many-colored stars, knitted or crocheted animals, and shiny ornaments purchased at local Christmas markets. On Christmas Eve after the children are asleep little toys, candies, and fruits join the decorations as special treats from Pere Noel.

Big department stores decorate their windows in the weeks before Christmas with animated scenes and figures much like the Macys store in the United States decorates its windows. People from all over France visit the department stores of Paris every year just to gaze at these works of art. Then, while they are at the store anyway, they purchase the toys, dresses, furs and other clothing, perfumes, candy, and chocolates they need for their Christmas giving and celebrating.

Another custom enjoyed all over France related to displaying nativity scenes is attending pastorales, performances of the Nativity story. Probably the most famous of these pastorales are performed at the Cathedral of Notre Dame de Paris. Each year many pastorales are performed by different regional groups from all over France. These performances, performed by local talent, may include musical and/or dance numbers and local humor. They often end with a living creche with live animals and, in some cases, a real baby portraying the Christ child.

As Christmas draws nearer children in the areas of France that expect to receive their gifts from Pere Noel, Father Christmas, write letters asking Pere Noel for toys, candy, and other gifts. Pere Noel, unlike Santa Claus, is a tall, slender old man with a white beard. He wears a long read robe edged with fur and sometimes wears wooden shoes. A donkey accompanies him carrying his sack full of toys and other goodies. On Christmas Eve children put their shoes by the fireplace for Pere Noel to fill.

In the Alsace-Lorraine region of France, instead of Pere Noel, children wait for Hans Trapp on Christmas Eve. Hans Trapp is accompanied by a young maiden who represents the Christ Child. Hans Trapp looks for bad girls and boys and wishes to punish them. The children, not wishing to be punished, promise to behave better in the coming year. The maiden then intercedes for the children and leads them to a Christmas tree full of presents.

At midnight Christmas Eve adults and older children attend midnight masses at beautifully decorated churches and cathedrals where joyful choirs and peeling bells welcome Christmas Day. Younger children, instead of attending mass, are sleeping dreaming of the presents they will receive in the morning.

After midnight mass families return home or visit a restaurant to enjoy a feast known as le reveillon. The foods served for le reveillon vary according to the region. Served in many courses, the meal may include such meats as roast beef, leg of lamb, goose, chicken, turkey, duck, pheasant, quail, grouse, and baked ham. Wild boar and venison are considered delicacies for this Christmas meal. The fish course may include all kinds of fresh water fish, oysters, snails, sea urchins, shrimp, clams, mussels, and lobster. One region of France makes buckwheat cakes served with sour cream a must–have dish for their reveillon. Salads and fruit such as oranges, apples, bananas, pears, grapes, tangerines, and plums are enjoyed by celebrants as well as all kinds of bread. Cheeses of all shapes and sizes and an assortment of pates made with goose, duck, or rabbit liver which may be mixed with minced ham or pork are integrated into this extensive meal. Wait! The meal is not finished yet. There is still dessert. Boxes of chocolates, hard candies, candied fruit, and other pastries like tartes, pies, tartlets, petit fours, napoleons, eclairs grace the table accompanying the piece de resistance, the buche de Noel or Yule Log cake. This sponge cake is rolled with a chocolate butter cream filling and frosted with a brown icing. It is often marked with lines to make it look like a log. It may also be decorated with confectioners' sugar, nuts, images of Pere Noel, roses, sugar or real, elves, or sprigs of fresh holly. Wine and/or champaign also accompanies the meal.

When the children awaken Christmas morning the family gathers around the family creche or the Christmas tree to open presents. Generally children are given gifts on Christmas Day; adults exchange gifts on New Year's Day.

Christmas in France — developed over more than fifteen hundred years, celebrated in a wide variety of ways, enjoyed by all.