Christmas Around the World — Ukraine 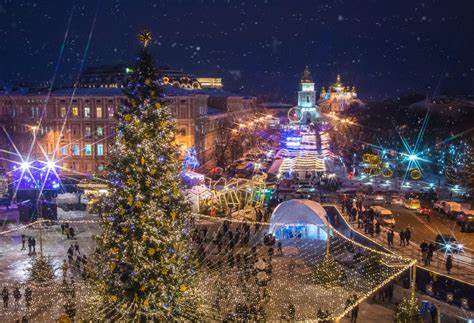 The Christmas season starts thirty-nine days before Christmas. This period of Advent starts with the Feast of the Presentation, December 4, and ends with the Feast of Jordan, January 19. During this time no meat or milk products are consumed and marriages, dancing, and partying are forbidden as the people reflect and prepare for the birthday of the holy Christ Child.

There are several feasts celebrated with special masses in the Ukrainian orthodox church during this time.

The Feast of the Presentation, December 4, celebrates the presentation of young Mary at the temple and is also the official end of all agricultural work. Cows may be sprinkled with seeds and their udders buttered and shrouded in smoke to protect them from evil spells and spirits and to ensure they give lots of milk thick with cream. Water is blessed by priests and taken home to be sprinkled around the house and barns to ward off illnesses and evil.

On St. Catherine’s Day, December 7, young men fast so God will bless them with a good wife. Young girls cut branches from a cherry tree and place them in a bottle of water placed in a warm place in the house. If the branch flowers before New Year’s Eve, good luck will come to her in the coming year.

On December 13, The Day of the Apostle Andrew, unmarried women tell fortunes using little cakes, melting wax, listening to barking dogs, asking passers by their names, and summon their beloved to appear in dreams hoping to learn the identity of future husbands. Young men tease girls and play pranks on their neighbors. A popular game played by boys and girls involve taking bites of cakes hung from the ceiling.

On the eve of St. Nicholas' Day, December 19, children set plates on the window sills or shoes on the hearth hoping St. Nicholas with leave them some goodies and a present. Before going to bed, the family sings a St. Nicholas carol to ensure a visit by the saint. Traditionally children receive three gifts from St. Nicholas: one to wear, one to play with, and one to wonder about. Family members may also exchange gifts including an item to be worn through the coming year.

The Immaculate Conception of the Blessed Virgin Mary, December 22, is the final holy day before Christmas and has been celebrated since Christianity arrived in Ukraine.

The Feast of Jordan, January 19, commemorates the baptism of Christ in the Jordan River by John the Baptist and marks the end of Ukraine's Christmas season.

During this time of Advent, the family is busy finishing their harvest, cleaning homes and barns inside and out, making repairs to houses, barns, and repairing broken relationships between family members, friends, and neighbors. All cooking and baking that can be done ahead of time for Christmas is done as well. All this work must be finished before Christmas Day.

When cleaning houses and barns, great care is taken not to disturb spiders and their webs. Spiders get this special treatment due to two legends.

A young widow had a tree but no money for decorations for the tree or presents for her children. On Christmas Eve while the family slept, a spider covered the tree with a majestic web. When the family woke the next morning, they found the tree covered with a beautiful, glistening, silver web.

A spider gave Jesus His first toy. As Jesus slept in the manger, a spider wove an intricate web above Him. When Jesus woke, He saw the light of the sun glistening off the dew clinging to the strands of the web making Him smile and laugh.

Christmas Eve is the last day of the no meat, no milk Advent fast. The day is spent preparing for the evening's Sviata Vecheria, Holy Supper. The whole family gathers together for supper, many of them helping with preparations. Final cleaning takes place, and the dishes for the meal are prepared. The table is prepared. A layer of hay is placed on the table covered by a plain linen tablecloth with cloves of garlic placed on all four corners. A second tablecloth decorated with traditional embroidered patterns is placed on the table. Three kolaches, circular braided bread, are stacked in the middle of the table with a candle placed in the hole at the top. Hay is placed on the floor under the table with treats hidden in it for the children to find after supper. Burning candles or other lights are placed in the windows and an empty place is set for any stranger or person in need who may appear at the door during the meal. An empty place is also set at the table for anyone in the family who died in the past year.

Sviata Vecheria begins with the first star appears in the sky.

Once the first star has been spotted, usually by one of the children, the family gathers around the table and sings the first koliadky, Christmas carol, of the season. The Sviata Vecheria traditionally consists of up to twelve dishes representing the twelve apostles, all made without meat or milk products. The first dish, Kutia, made with boiled wheat or barley, poppy seeds, and honey is a favorite dish served in several holiday meals. Other dishes include pickled herring, mushrooms, dill pickles, borscht, boiled, baked, or jellied fish dishes, sauerkraut and potato dishes, stuffed cabbage with rice or buckwheat filling, beans, peas, and other vegetables. For dessert, phrohy, boiled dumplings, with fruit stuffings or varenyky, a rich sweet dessert of stewed fruit, may be served.

After the meal, which may last several hours, is finished a koliadky is sung followed by the children diving under the table to find the treats hiding in the hay. Gifts may also be exchanged after Sviata Vecheria.

Many will attend Christmas Mass either at midnight or early Christmas morning. The rest of Christmas day may be spent caroling and visiting friends, extended family, and neighbors. Christmas meals may include foods made with meat and milk products, Christmas honey cake, honey cookies, fruit and nut bars, poppy seed tortes, filled crescents, and more.

Ukraine's New Year's Eve and New Year's Day celebrations, also known as Shchedryi Vechir, or Generous Eve or Malanka, may be held on one of two dates depending on the region. Malanka celebrations are held on the eve of the Feast of St. Basil, January 14. Others celebrate New Year's Eve on the Feast of Jordan, January 19. People celebrate singing shchedrivky, New Year's carols, telling fortunes (a favorite New Year's saying is "As goes the New Year's Day, so goes the year."), dressing in costume, acting in playful skits, and dancing. Boys go house-to-house singing shchedrivky and give good wishes for prosperity and gook luck to the residents of the house.

Many homes put up a decorated yalynka, Christmas tree. The decorations include handcrafted ornaments, colored paper or foil, paper chains, sugar or honey cookies, polished apples, foil-covered nuts, brightly wrapped candies, straw ornaments (many in the shape of stars and spiders), and tiny candles or lights. St. Nicholas in the form of Grandfather Frost may bring gifts to place under the tree.

Many families attend the Feast of Jordan Mass and receive water blessed by the orthodox priest to take home to bless the home, family, and livestock. After a festive meal, the yalynka is taken down, removed from the house, and burned. This marks the end of the Christmas season for another year.